I’m absolutely delighted to share that THE STRANGER IN OUR BED went into production in November 2020 for a feature film that is due to be released in cinemas in early summer 2021. 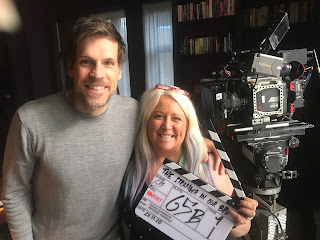 The film is being produced by production company BUFFALO DRAGON and is directed by Giles Alderson (The Dare) and stars Samantha Bond (Downton Abbey), Emily Berrington (Humans), Ben Lloyd-Hughes (Industry).

It has been an absolute delight to work with producers Terri Dwyer and Dean Fisher as well as the amazing Giles Alderson (featured in the phot with me).

I couldn’t be happier with the chosen cast who I now see as the characters in the book!!

For more information please read the announcement in VARIETY.