Some of the authors of this amazing Doctor Who Spin off, will be in store to sign and promote THE DÆMONSOF DEVIL'S END Novelisation.

MORE CHANCES TO MEET THE WRITERS

TWO CHANCES THIS WEEKEND TO MEET WITH SOME OF THE WRITERS OF THE DOCTOR WHO SPIN OFF THE DAEMONS OF DEVIL'S END.
WATERSTONES, Peterborough, Saturday 25th November 2017

Some of the authors of this amazing Doctor Who Spin off, will be in store at Peterbrough Waterstones to sign and promote THE DÆMONSOF DEVIL'S END Novelisation.

Some of the authors of this amazing Doctor Who Spin off, will be in store to sign and promote THE DÆMONS OF DEVIL'S END Novelisation.

MEET DAMARIS HAYMAN, KEITH BARNFATHER AND THE WRITERS OF
THE DAEMONS OF DEVIL'S END.

Some of the authors of this amazing Doctor Who Spin off, will be in store to sign and promote THE DÆMONSOF DEVIL'S END Novelisation and DVD with actress Damaris Hayman, Richard Franklin and David Simeon.

MEET THE ACTRESS, DIRECTOR AND THE WRITERS!!

I'm delighted to reveal the cover for my forthcoming title POSING FOR PICASSO. 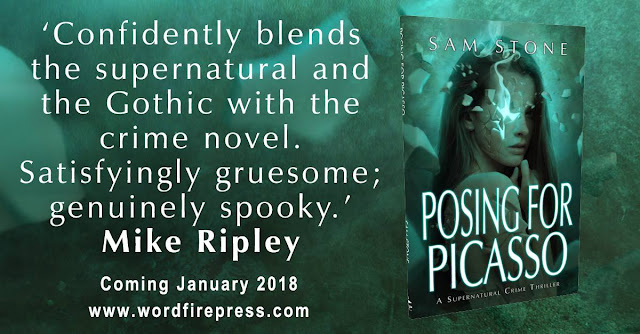 Above with a quote from crime writer Mike Ripley. Artwork by the amazing Marcela Bolivar. This supernatural thriller will be published on 10th January 2018 with Wordfire Press.

It was Annabel, and something was wrong with the features … He thought he saw a triangle, not an irregular jigsaw shape after all. And it was missing from her face. As if a sharp pastry cutter mould had been stamped through her skull.

When Detective Jake Chandler is called in to investigate a murder, nothing can prepare him for the gruesome sight of Annabel Linton …


Annabel was his model for Russian artist Avgustin Juniper who finds himself in the centre of the investigation … but he had no motive.

Criminal attorney Cassandra Moúsa sees this a her next big case will stop at nothing to prove her client’s innocence.

But as more of Juniper’s models die, Chandler’s investigation leads him to four beautiful, unique women and the lost diaries of Pablo Picasso.

Something wants to return … and Chandler has to stop it.

There has been a few changes to our appearances since I last posted - so here is the updated list:

Sam Stone and David J Howe will be attending this new event in Coventry.

Sam Stone and David J Howe join Keith Barnfather and Damaris Hayman at Galaxy Four in Sheffield to launch the DVD of DEAMONS OF DEVILS END.

Sam Stone and David J Howe, join the line-up of excellent guests at this ever popular Doctor Who convention in Los Angeles.

Sam Stone and David J Howe join the line-up of guests at this thriving Pensacola show.


Sam Stone and David J Howe run Author Central in Spaceport at this event. Please join Chic Festivals, Telos Publishing and Area 51 with a host of Media and author guests at the Hafan Y Mor Holiday camp in North Wales. This is a long weekend of Panels, Talks, Music, entertainment, cosplay and more.

Sam Stone and David J Howe join the list of fantastic guests at this ever popular event.

Sam Stone and David J Howe will be attending this new event in Coventry.

Sam Stone and David J Howe, join the line-up of excellent guests at this ever popular Doctor Who convention in Los Angeles.

Sam Stone and David J Howe join the line-up of guests at this thriving Pensacola show.


Sam Stone and David J Howe run Author Central in Spaceport at this event. Please join Chic Festivals, Telos Publishing and Area 51 with a host of Media and author guests at the Hafan Y Mor Holiday camp in North Wales. This is a long weekend of Panels, Talks, Music, entertainment, cosplay and more. 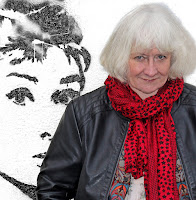 After being under the hospital for over a year now, and after going through two mammograms, a biopsy, the draining of cysts, and various other scares, I can no longer put myself through this stress.
Therefore I'll be going into hospital at the end of June to have risk reducing surgery in the form of a double mastectomy and reconstruction.

Naturally, this was not a decision I took lightly.

My sister Sharna is recovering from breast cancer and we have lost a niece and, possibly, our grandmother to the disease. On top of that my nephew has recently survived Lung cancer. There have been various other family members diagnosed over the last few years too. As a result, my family have been diagnosed as high risk.


I am incredibly grateful to the NHS hospital who is dealing with this and for the amazing support from the Macmillian nursing team. They have been there for us every step of the way and have helped me make an informed decision that I know is the right one for me.

This week sees the publication of issue 41 of Fear Magazine with a six page interview with me. Find out what I'm up to at the moment.

Buy your copy here
Posted by Sam Stone at 11:52 No comments: