Voting for the British Fantasy Awards will be closed on 31st July 2010.

If you are a BFS member, or an attending of either 2009 or 2010 FantasyCon you are eligible to vote for this years British Fantasy Awards on the following link.

Don't forget to support the BFS and your favorite artist or writer by voting today.

Get Frazer Hines Back on TV!

Yesterday I started a campaign with Trudy Messingham to get Frazer Hines back on Doctor Who.

As a huge Who fan myself I've been watching the series and loving every minute of the new Doctor, Matt Smith. I'm not the first to have noticed how very like Patrick Troughton he is. There was some brilliant writing this season - the best in a long time - and all the actors had some great stories to work with.

Frazer Hines has been off our TV screens for quite some time. Some of this was because he was keeping a low profile due to suffering and now overcoming Bowel Cancer. Yesterday, Frazer bravely spoke out about his illness to The Sunday People, opening describing his battle with cancer. It was an inspirational interview and it made me realise how much of an influential personality Frazer is.

But has the industry forgotten this?

His fans haven't. And that's why this campaign has begun. If you want to see Doctor Who's longest serving and much loved companion back in the series then please join us on Facebook... Get Frazer Hines Back on Doctor Who

Other fans have joined the campaign already and a further campaign to Get Frazer Back On Emmerdale has quickly followed suit. 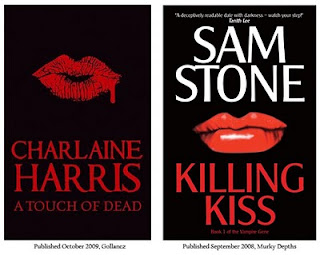 There's been a spate of articles in the press directed at killing off (pun intended) vampires in literature but I'm here to tell you that vampires aren't dead yet.

Vampire literature has been popular since the 19th Century. We have excellent literary writers in our history such as Sheridan Le Fanu, Bram Stoker and Lord Byron (to name but a few) writing stories that featured the undead.

Modern literary and terrifying vampire writers such as Simon Clark, author of Vampyrrhic and Vampyrric Rites have created vampires with a mythology of their own. These are brutal and frightening monsters that show no human emotion or feeling whatsoever. You only have to look at the writing of Tanith Lee in her novels Vivia and Sabella in order to appreciate that there is some very good and very diffrent stuff out there. And let's not forget Chelsea Quinn Yarbro who was there long before Anne Rice.

The mistake people are making right now is assuming that vampires equal teen paranormal romance, which is so far removed from 'literature' that it is a completely different genre.

When I was at university doing my MA in Creative Writing I wrote my first novel, Killing Kiss, as my dissertation. At first the head of faculty wasn't sure whether the book would be acceptible (he hadn't read it but had a prejudice against genre writing). Thanks to my tutor, literary author Janette Jenkins, who fought my corner with me, I was able to put the novel forward, because we were able to prove it was indeed 'literary fiction'.

Unfortunately though the prejudice still rears its ugly head.

In the early days when I first started mixing with other horror and fantasy writers I was repeatedly asked if my book was horror/romance. Even folks in the genre were making that equation 'vampires=romance' in their heads. It gets a little wearing when you're on the third book of a trilogy that takes in horror, fantasy, time travel, science fiction, paganism, vampires, witches and spiritualism, and there are still people making the same assumptions ... and I wonder if they have even read my work!

It is perhaps ignorant and uniformed to make judgements about a writer without first reading their work. A little like reviewing a film you haven't seen, or going off just the trailer to determine what it's all about. And so I repeat again, literary horror/fantasy is nothing like paranormal/romance. They are different genres entirely. Literary fiction is well written, intelligent, often multi-layered, and the prose will be well-formed and deliberate in its purpose, perhaps even poetic, to create specific imagery in the mind of the reader.

From what I have read, paranormal romance tends to be about boy meets girl, they fall in love and the human one usually ends up being a vampire/werewolf or whatever. Basically the plot is the same, while locations, names and characters all change. There is so much out there at the moment that I cannot keep up. And to be honest I don't want to as it doesn't appeal to me. I see other reviewers saying the same thing, that the books are all the same and don't change or add anything to the myths and legends along the way.

I have nothing against paranormal/romance - reading tastes vary, and each to his own anyway - but I don't want my books to be categorised in this genre. Especially when I've spent several years working very hard on developing my own unique writing style, and trying to do something original which appeals to me.

Going back to my original point though, Vampires have been around a long time in fiction. Just because there are some poor examples, and there is a flooding on the market of not very good vampire books, it doesn't mean that all of this fiction is therefore dross. There have been some excellent books written by Christopher Pike, whose Last Vampire Series has been hugely successful, is beautifully written and thoughtfully crafted. We can look at Laurell K Hamilton's Anita Blake Series (and I know that some of you may criticise a few of the later books as deteriorating into pornography - and I agree, they did) but the first five books make Ms Meyer's plots look like the scribbles of an illiterate 12 year old. There is also Charlaine Harris' Sookie Stackhouse series. The first book does get off to a shaky start, but then Harris took the characters, created fabulous storylines which are truly multi-layered, and she ran with it. I have to say TrueBlood is one of my favourite TV programmes of the moment. My friend Raven Dane has written a terrific vampire series called Legacy of the Dark Kind, and I can tell you, there's not a sniff of romance in it. And not forgetting of course Stephen King, whose Salem's Lot almost defined the vampire story for anyone who read it in the seventies.

I can't believe that people get taken in by the media hype - the media created Twilight mania in the first place, and blew it out of all proportion with a frenzy of obsession that's driven most teenage girls to distraction as they either love or detest the series. All to sell more books and DVDs (and T-Shirts, magazines and other merchandise ... and I wonder who owns the companies producing all these things ... would they be the same companies which produce the films, and which publish the books ... and which also publish the newspapers and magazines which hype and promote so much). Now the Media, in typical fashion, want to take it back and smash every good vampire book on this trail of destruction. This cycle of 'promote to the skies and then destroy' is a familiar one in UK media. It sometimes seems that we build people up, only to then knock them back down again in as harsh and critical manner as we can.

The media have done the same thing with Global Warming over the years, and Swine Flu, and Mad Cow Disease, and Bird Flu - just think about the panic that's been stirred, only to be followed by articles from the professionals saying it isn't true at all.

Well I'm saying categorically: Vampires are NOT dead. They won't die so far as there are good, strong, talented writers out there to keep the vampires' fangs sharp and their tastes brutal.

And if you, like me, don't care for the sugary romance stories - then fine! DON'T BUY THEM.

But please stop dissing vampires  It isn't their fault. Poor misguided creatures. But we can show the publishing industry and the media how very discerning we are, and support the good writers out there. Because - Let's be honest - we need your support before we all disappear under a deluge of romanticised, sparkly, friendly, vegetarian creatures of the night.
Posted by Sam Stone at 11:32 No comments:

I'm please to announce that there are now new ways to purchase Killing Kiss (Book 1 of The Vampire Gene).

If you're a fan of IPhone & IPad like me then click on these links to upload the book now:

Or if you prefer using Kindle you can purchase the ebook on this link: Killing Kiss Kindle
Posted by Sam Stone at 19:48 No comments:

Doctor Who - The Big Bang 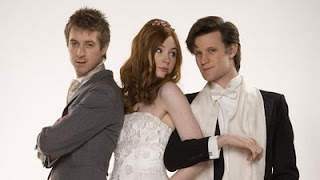 Wow! What an amazing ending to a superb season of Doctor Who!

This series we've seen a return, in some ways, to the good old days of clear and exciting plotting at the hands of that fabulous writer Steven Moffat.

We've got new characters/companions and the return of River Song.

Highlights for me include the opening The Eleventh Hour (which was a brilliant introduction to the eleventh Doctor, Amy and Rory), Vincent and the Doctor(Beautifully emotive and incredibily poignant), The Time of Angels/Flesh and Stone two-parter. (After all we love the Angels don't we?), The Lodger (a great insight to how 'unhuman' The Doctor is) And last but not least The Pandorica Opens/The Big Bang finale which was just amazing!

Congratulations to Steven Moffat, Matt Smith, Karen Gillan and the mega adorable Arthur Darvill who has definitely been the dark horse in the series. Who'd have thought we'd begin to love Rory Williams so much?

But let's not forget the beautiful performances by Alex Kingston as River Song - I adore her no nonsense, kick-ass attitude and intriguing ambiguoity. I definitely want to see much more of her in the next series.

Find out more of mine and David J Howe's thoughts about this fantastic conclusion as we chat to Lewis Bailey, Dale Who and Tara Wheeler at The Happiness Patrol.

Can't wait for Christmas now. With Mr Moffatt in charge it's sure to be a rollercoaster ride!