KAT ON A HOT TIN AIRSHIP 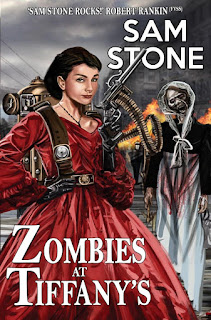 Last Friday I signed the contract with Telos Publishing for my new novella, Kat On A Hot Tin Airship which is the sequel to Zombies At Tiffany's.

To celebrate this forthcoming September 2013 release, you can now buy Zombies At Tiffany's on Kindle.

So help us celebrate this new release and catch up on The Kat Lightfoot Supernatural Mysteries series now!

Soon Kat and her friends are fighting for their lives against a horde of infected people, with only their wits and ingenuity to help them.
A steampunked story of diamonds, chutzpah, death and horror from the blood-drenched pen of Sam Stone.
Posted by Sam Stone at 17:32 1 comment:

I've been asked several times recently when Silent Sand:  Book 5 The Vampire Gene Series would be made available for kindle and here it is!