I will be doing a reading and signing THE BEST OF BRITISH FANTASY 2013 published by Salt Publishing earlier in the year.

The doors open at 6pm - there are refreshments and then the first readings. After this a short break and the second round of readings. Ending with a signing session.

For further details Waterstones,
Posted by Sam Stone at 08:13 No comments:

There will be stalls, readings, traditional Welsh music in and around the town and Memorial Hall.

I'm thrilled to finally be able to share the news that ZOMBIES AT TIFFANY'S will be available in Audio via Spokenworld. This is going to be recorded on 20th September and I will be there to enjoy the fun  and meet Director/producer Neil Gardner and reader Stephanie Cannon (You'll remember her from the ZOMBIES IN NEW YORK AND OTHER BLOODY JOTTINGS AUDIO).

A blog, photos, and possibly a podcast of events from the day to follow. Should be fun! 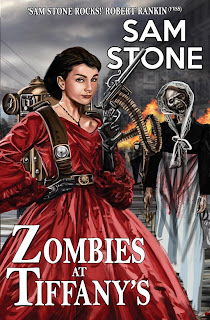 Press release below for full details:

Stephen James Walker and David J Howe, Editorial Directors of Telos Publishing are delighted to announce that audio rights to Sam Stone's Steampunk horror novella ZOMBIES AT TIFFANY'S have been picked up by Neil Gardner at Spokenworld Audio.

'We've long been an admirer of Neil's work in the audio field,' says David Howe. 'He's a great supporter of genre fiction and audio, and so when he approached us about whether the rights to Sam's book were available, we were over the moon.'

'I am extremely excited to be bringing the zombie-infused adventure of Kat Lightfoot to audio,' says Spokenworld Audio MD and lead producer Neil Gardner. 'Having previously produced Sam's short horror story collection ZOMBIES IN NEW YORK AND OTHER BLOODY JOTTINGS on behalf of AudioGO, I jumped at the chance to work on another of her brilliant stories, and bring Sam to my own audiobook label. We have the fantastic Stephanie Cannon back to read, and will be indulging our love for adding music and sound effects.  Hopefully this will be just the first of many Sam Stone audiobooks that Spokenworld Audio will be producing ... she is a unique talent who brings creativity and incredible imagination to everything she writes.'

'I can't wait to hear what Neil and the crew at Spokenworld do with my Zombies,' says Sam Stone. 'I was absolutely delighted with their work on my short story collection, and I know that they will do a fantastic job on this book too. It's a pleasure hearing my characters come alive in this way ...'

ZOMBIES AT TIFFANY'S - the audiobook, will be released on 31st October 2013, exclusively at www.spokenworldaudio.com

Sam Stone’s first novel, Killing Kiss, won the silver award for Best Horror Novel in ForeWord Magazine’s Book of the Year competition, and her subsequent novels and short stories have gained her much acclaim, including winning the British Fantasy Award. She holds an MA in Creative Writing and is a noted public speaker and lecturer. Sam’s website is at www.sam-stone.com.

Telos Publishing was formed in 2000 by David J Howe and Stephen James Walker, and since then has published novels and novellas by many authors including Christopher Fowler, Graham Masterton, Stephen Laws, Simon Clark, Paul Finch, Steve Savile, Kim Newman, Paul McAuley and Stephen Gallagher. They are also known for an extensive range of unofficial guides to film and television, including Doctor Who, Space 1999, The Rocky Horror Show, Battlestar Galactica, Tarzan and A Song For Europe. www.telos.co.uk

SpokenWorld Audio is the new home for audio fans...a safe-haven for forgotten and ignored audio...a commissioner of new audio productions...and your one-stop shop for independently-produced audiobooks and radio programmes! High-quality, innovative and original audio for all ages. We are starting a revolution in audio and you are invited to join us...as a listener, as a contributor and as a supplier. Transforming the written word to spoken word. Spokenworld Audio was formed in 2010 by Neil Gardner and is wholly owned by Ladbroke Audio Limited. www.spokenworldaudio.com

THE DARKNESS WITHIN RELEASE 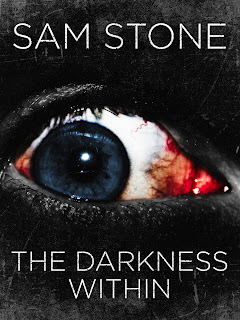 This has been a very exciting week for me. Firstly I discovered that my novella THE DARKNESS WITHIN, bought by AudioGo and due for release this October in Ebook and Audio, had already found it's way onto Ebook.

But the news didn't end there ... it's also gone to Hardback in large print format with Chivers. Due for release on 7th October.

I didn't know they had a hardback planned - so a very exciting surprise for me as this is the first title I've had in hardback!

Needless to say I'm over the moon to have my first Hardback out there!


WATERSTONES, BOLTON, LANCS, SAT 7th SEPT 2013.
Sam Stone will be launching her new novella KAT ON A HOT TIN ROOF at Waterstones Bolton.
Hot off the printing press. Copies of ZOMBIES AT TIFFANY'S will also be available as well as some Vampire Gene titles.