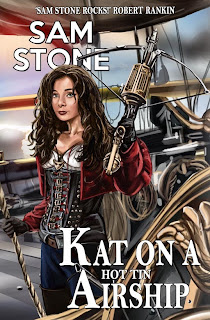 You can pre-order SIGNED copies from Telos Publishing HERE.

Cover art is by the fantastically talented Martin Baines. (I love his pulpy style, which seems to compliment my work so well.)

Also still available ZOMBIES AT TIFFANY'S - which can be purchased from Telos (SIGNED), Amazon, and all good bookstores or on kindle.

Hope you enjoy this revisit to the world of Kat Lightfoot, George Pepper and Martin Crewe.


KAT ON A HOT TIN AIRSHIP