Snowing in the UK 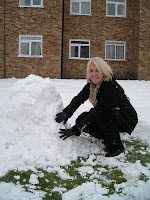 This Monday it was a rare treat to have the day off when London was snowed in. This is an unusual occurance for me because in Manchester we get snow quite frequently. Which means it doesn't often cause that much havoc.

In London however, the trains were off. Schools were closed for the day and buses were running on a skeleton service.

I went out for a walk in the afternoon with my boyfriend, everyone was treating the day like an unexpected holiday, and in some respects it was. All along the streets people were building snowmen, and I don't just mean the kids. It was nice to see all the happy smiling faces too. They were really appreciating the time they had extra to spend with the family.

It made me realise what the Christmas/holiday season was all about. I wonder if we were making up for the lack of snow on Christmas day? But also, 2008 was a very difficult year for all, what with the credit crunch and all the stress and strain of daily living, so why not feel an intense relief when you don't have to have your nose to the grindstone for at least one day?

Sometimes when we can't act, when things are taken out of our hands, it gives us an opportunity to relax. After all, if there's nothing you can do, what choice do you have?

Life is stressful. An unexpected holiday, even for a day, probably did everyone a world of good.

As for me, I wrote a short story (almost 5,000 words) that I'd been meaning to tackle. Without other distractions I was able to focus on the task and it was easy.

Which just goes to show what can be done in a day when you aren't worried about other commitments.

So, I'm feeling very chilled and very accomplished right now. How are you feeling?
Posted by Sam Stone at 10:07

Well considering I had a deadline for a story that I was ghostwriting, not very well.